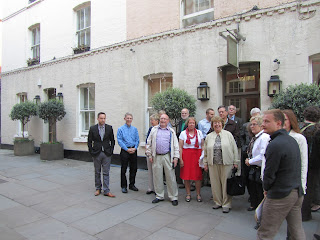 Our group of cultural tourists, 29 strong, have been arriving in Covent Garden district of London over the last few days, with the final travelers checking into our Fielding Hotel this morning. All present and accounted for, we kicked off the official start of the “Britten in Britain” cultural heritage tour with a wonderful dinner this evening of lasagna, sausage skewers, roasted chicken and fish stew. 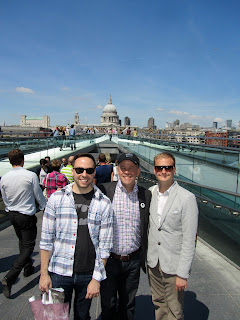 Though the “official” activities have just begun, that doesn't mean we haven't already been busy taking in the many cultural offerings of this fantastic city. “The Audience” with Helen Mirren, “Singing in the Rain” at the Palace Theater, the Tate Modern, Saint Paul's Cathedral, The National Gallery, Saint Martin in the Fields, The London Eye, and ballet at the Royal Opera House…just a few of the samplings our group members have enjoyed. And, several have enjoyed special activities to celebrate the 60th anniversary of the coronation of Queen Elizabeth II, including a magnificent service at Westminster Abbey.

We are honored to have Dr. Michael Sells as our cultural leader on this trip. Professor Emeritus at Butler University, and formerly of the faculty of the University of Southern California, Michael had a significant career as tenor soloist, performing works of Britten, Bach and others with such conductors as Helmuth Rilling, Roger Wagner, and William Hall. A lifelong devotee of the music of Benjamin Britten, we were thrilled that he agreed to join us and share his unique professional and personal insights with us all. 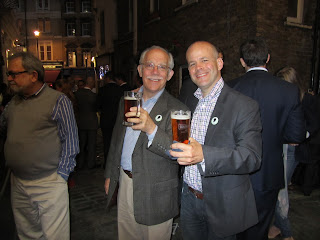 Michael Sells and I raise a toast to Benjamin Britten

2013 marks the 100th anniversary of the birth of Britten. And, with our own commemorative performance of his magnificent War Requiem ahead of us in May 2014, this trip gives us a chance to celebrate the meaningful choral contributions of this singular composer as we anticipate getting to live with his music in rehearsals and performance in the season to come.

So, stay tuned to this blog for regular updates from our tour. And, join us in Indianapolis on May 3, 2014, for our performance!